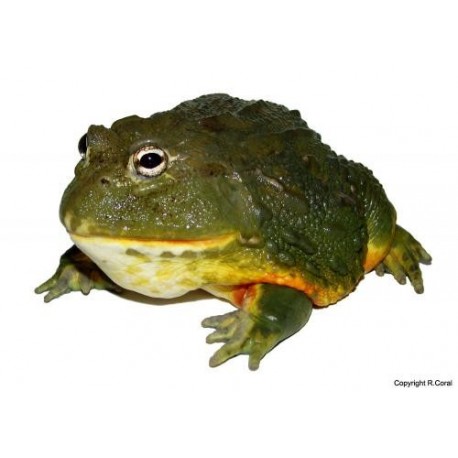 With most frogs and toads, the female is generally larger than the male. However, with the African Bullfrog, the male is a much larger animal. Males also have more powerful limbs and larger skulls. In the wild, some larger male African Bullfrogs in a population will demonstrate parental care by guarding their tadpoles against predators and, when necessary, insuring sufficient water is accessible to their brood by digging channels between pools.

These guardian males have been known to attack animals much larger than themselves in defense of their offspring. The size differences between the sexes are probably due to this parental behavior and the violent fighting that occurs between males at breeding time. Fighting takes the form of grasping an opponent in an attempt to flip or throw him.

These frogs are equipped with bony tooth-like projections called odontoids, located in the center of the lower jaw, which can deliver a very painful and bloody bite to an opponent or the finger of a human being. When forced on the defensive, these frogs will puff up with air to appear as large as they can, and in the case of guardian males they will lunge at the attacker with jaws open in an attempt to deliver a discouraging bite.