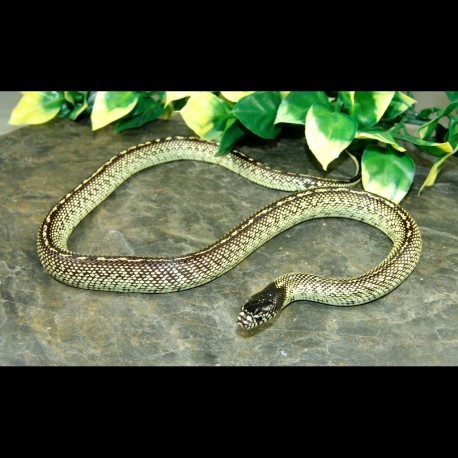 Desert Kingsnakes (Lampropeltis getula splendida) A kingsnake native to Texas, Arizona and New Mexico. It is non-venomous, colored yellow and black. The desert kingsnake's diet consists of rodents, lizards, and smaller snakes, including rattlesnakes.They normally grows 3-4 feet long with a maximum length of 6.8 feet. They are docile creatures when coming face to face with humans. If they do not try to escape, often they will "play dead" by flipping over onto their backside and lying motionless. Interestingly, it has been reported that if one flips a pretending snake back into its natural position, it will flip itself over again - thus defeating the purpose of pretending to be dead. Some, such as ranchers, that domesticate kingsnakes do so in the hopes that they will feed on other snakes that might present more of a threat.

The desert kingsnake may occur in any rural habitat within its range. Despite its common name, it is most likely to be found in mesic areas, especially near water tanks or within riparian corridors.

This snake is known to be a powerful constrictor, and therefore its diet consists of mostly mice if domestic, and other rodents if wild. It also can feed on clutches of reptile eggs detected beneath the surface via smell. In part because of their resistance to pitviper venom, the desert kingsnake is able to consume young diamondback rattlesnakes that are common within its range, and at the scent of L. getula even adult western diamonbacks edge hastily backward, shielding their heads with defensive loops.

As with most reptiles, L. g. splendida lays eggs. Courtship and copulation occurs between the months of March and June, with clutches of 5 to 12 adhesive-surfaced eggs deposited in late June or July, sometimes buried as deeply as a foot to prevent drying through their moisture-permeable shells. After about 60 days of incubation the 8 to 10-inch long hatchlings emerge, weighing about a fifth of an ounce. Brightly yellow-speckled in vertebral cross-lines, they also exhibit a lateral row of large, dark brown spots which, as they mature, are gradually fragmented by encroaching yellow flecks.