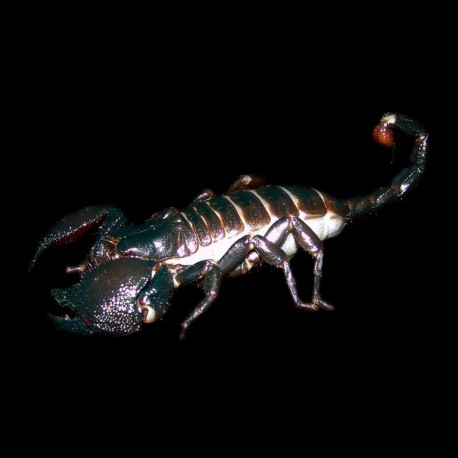 The Emperor Scorpion or Imperial Scorpion (Pandinus imperator) is a species of scorpion native to Africa. The emperor is one of the largest species of scorpion in the world, with adults averaging about 8 inches (20 cm) in length. However, some species of forest scorpions are its equal and one scorpion, Heterometrus swammerdami, holds the record for being the world's largest scorpion at 9 inches (23 cm) in length. Their life span usually ranges from 5-8 years when held in captivity, but is likely shorter in the wild. The emperor's size, relatively low toxicity, and life span make it the most popular scorpion in the pet trade, which has led to such over-collecting in the wild that it is now a CITES-listed animal, meaning it is threatened with extinction if exportation and other threats, such as development, are not regulated.

In the wild, emperor scorpions are reported to feed primarily on termites. In captivity they readily feed on crickets, cockroaches, and mealworms. Emperor scorpions are also known to eat small mice and lizards. Emperors are burrowing scorpions, digging with the first two pairs of legs. A burrow may be little more than a hollow under a rock or may twist and turn more than six feet into the earth. In the wild, emperors are said to burrow into termite mounds and make their homes there.

Emperor scorpions are preyed on by reptiles, mammals and amphibians.

The emperor scorpion, like most scorpions, is timid and reclusive. If given a choice they will spend the vast majority of their time hiding in a hole, only venturing out to hunt. When frightened the emperor scorpion will run if possible, but if it feels cornered it will enter a 'threat posture'. When threat posturing, the scorpion turns to face its enemy while holding the claws up and open, and arching the tail and stinger over its back. If harassment continues at this point the scorpion is likely to sting, but may also pinch with its claws. The pinch is surprisingly powerful and the sting, although toxic, has varying affects on humans; some report no problems while others suffer severe pain. Emperor scorpion venom contains a toxin called imperatoxin. The sting feels somewhat like a bee sting. Emperor scorpions are not cannibalistic and do seem to have a ritualistic mating dance of some kind.

Emperors, like all scorpions, give live birth to their young. Gestation can last 9 to 18 months depending on temperature and food availability, when an average of 12 young are born. Baby scorpions, called scorplings, are born very vulnerable and unable to fend for themselves. The mother emperor cares for her babies in a number of ways, such as fiercely defending them and killing prey for them. Like all scorpions, the young emperors ride on the mother's back when very small. As they molt and grow, they will venture off their mother's back, explore the world and attempt to catch prey. If they stay too long, she will start to kill her young. For a few months the scorplings will return to their mother's back when frightened, until eventually the scorplings make burrows of their own and become independent.

Despite being near-black in color, the emperor glows a bluish-green when exposed to ultra-violet light, although scorpions typically do not fluoresce after birth or after molting. Wild scorpions are often poached by collectors using hand-held mineral lights to detect them. If you keep a black light on an Emperor scorpion for an extended period of time (ex. 1 yr.)the scorpion will lose its fluorescence.

The only disease known so far to occur in emperor scorpions is cancer or ovarian fibroids.

It's a genetic problem involving one generation to the most female sex scorpions causing death. It takes place after the fifth molt (from 15 cm. Pelipalpos to the tail). The disease begins with a small bump on the back or tail of the scorpion. The development of this varies between the first 2 months of moulting up to 3 years after the same.

It consists of 3 stages: the first is primary and is the formation of the ball, the second or middle when the ball is growing and exceeds the millimeter, the third or final when the ball has passed to the external opening and it shows a large mass as if she has put half of a marble in place or less. At this stage the scorpion does not move much, stops walking and eating and cannot lift her tail. Tremors in her limbs show that she is suffering cardiac arrest and will shortly die.