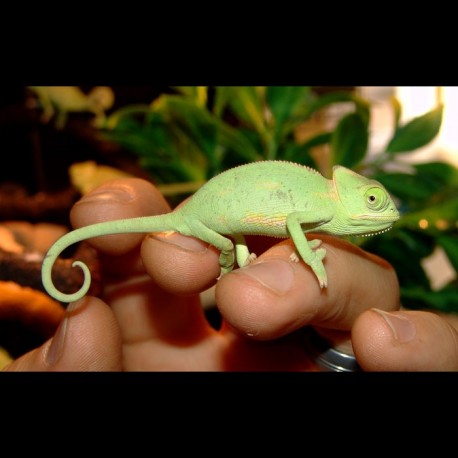 The Veiled Chameleon, Chamaeleo calyptratus, is a large species of chameleon found in the mountain regions of Yemen, United Arab Emirates and Saudi Arabia. It is also sometimes referred to as the Yemen Chameleon.

The male veiled chameleon is green in color and, depending on the animal's emotional state, this green will range from a bright lime green to a red olive drab. Surroundings only partly contribute to a chameleon's "decision" to change color. The green base color is marked with stripes and spots of yellow, brown, and blue. Non-breeding females and juvenile chameleons are generally a uniform green color with some white markings. Breeding and gravid females are a very dark green with blue and yellow spots. The prominence of these markings is dependent on several factors including health, mood, and temperature of the lizard.

Male chameleons of the species have small spurs or heels on the back their rear feet; while females do not. This spur is present on males from hatching, and can grow larger with maturity. Aside from the previously mentioned color differences, adult male veiled chameleons are large animals. It is possible for them to reach an overall length of 24 inches (60 cm). Most specimens usually reach between 14 to 18 inches (35-45 cm). Females are smaller with the average overall length being just under 12 inches (30 cm). Males and females both have a decorative growth called a "casque" on their heads. The casque of a male chameleon is much taller than the female's.

Like most chameleons, veiled chameleons are specialized tree dwellers. They have a flattened body meant to mimic a leaf and feet specially designed for grasping limbs and branches. They have a prehensile tail that acts as a fifth appendage and aids in climbing. Their eyes work independently of one another allowing the chameleon to look in front of and behind itself at the same time. They have a long sticky tongue that they use to capture their insect prey. Veiled chameleons are ambush predators and are capable of lying still for very long periods of time waiting for an unsuspecting locust to wander by.

Veiled chameleons are omnivores. While their main diet consists of insects, they will occasionally consume the leaves, blossoms, and fruit of various plants. This is especially true in times of drought when water is scarce. Like all chameleons, veiled chameleons prefer to drink water that is in drops or on leaves. They do not always recognize standing water and may dehydrate if that is their only source.

Female veiled chameleons can produce up to three clutches of eggs a year, as early from 4-6 months of age. Each clutch may contain 20-70 eggs. The eggs dissimilar to chickens. They retain sperm, which is why they lay so many clutches. Egg-laying sand must be provided for mature females in an incubated bucket or etc. with approximately 8-10 inches of organic garden soil, or they can die of egg binding.

Veiled chameleons are often kept in captivity due to the fact that they are hearty when compared to other chameleon species often offered for sale. Like most old-world chameleons, they must be kept individually in a screened enclosure, and provided with a basking light, and a source of UVB/UVA light. As with all exotic pets, a qualified herpetologist veterinarian should be consulted when getting a new animal, and when any health or behavior problems are observed.