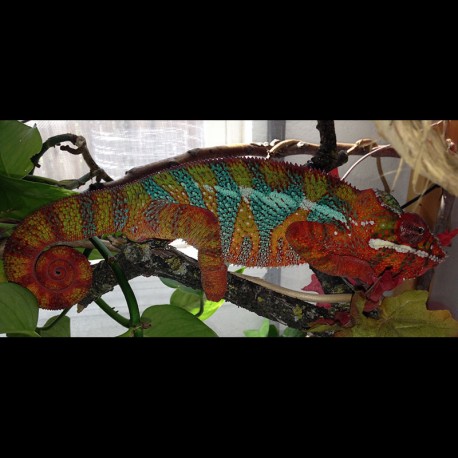 * Captive bred by The Serpentarium! *

We have babies available from both sires photoed.

The Panther Chameleon (Furcifer pardalis) is a species of chameleon. It lives in the eastern and northern parts of Madagascar in a tropical forest biome. Additionally, it has been introduced to Réunion and Mauritius.

Male Panther Chameleons can grow up to 20 inches (50 cm) in length, with a typical length of around 17 inches (45 cm). Females are generally much smaller, about half the size. Male Panther Chameleons are also much more vibrantly colored than the females. Coloration varies with location, and the different color patterns of Panther Chameleons are commonly referred to as 'locales', which are named after the geographical location in which they are found. Panther Chameleons from the areas of Nosy Be, Ankify and Ambanja are typically a vibrant blue, while those from Antsiranana and Sambava are red, green or orange. The areas of Maroantsetra and Tamatave yield primarily red specimens. There are numerous other color phases, and patterns differ between and within regions. Female Panther Chameleons generally remain tan and brown with hints of pink peach or bright orange, no matter what region they are from, but there are slight differences in patterns and colors among the different color phases.

For reptile enthusiasts, particularly chameleon enthusiasts, panther and veiled chameleons make fascinating and rewarding pets. However, they are finicky creatures, who require a precise environment which almost exactly mirrors that of a jungle, and are expensive and time consuming to properly maintain. They require proper lighting, heating and humidity, as well as a diet that consists of a variety of live insects as well as vitamin and calcium supplementation. Common feeder insects for captive chameleons include crickets, soldier fly larvae, silkworms, hornworms, dubia roaches, mealworms, superworms, waxworms, and butterworms.

When gravid, or carrying eggs, females turn dark brown or black with orange striping to signify to males they have no intention of mating. The exact coloration and pattern of gravid females varies depending on the color phase of the chameleon. This provides a useful way to distinguish between locales.

It is also a common misconception that chameleons of any kind can change colour to match any colour they are up against. All chameleons have a natural colour range with which they are born and is dictated by their species. Colour change is, for the most part, subconscious. It is affected by temperature, mood, and light. If, for example, the colour purple is not within the range of colours their particular species can change, then they will never turn purple.

Panther Chameleons can live up to 10 years in captivity. Females, if bred often, usually only live 2-3 years after laying eggs (between 5 and 8 clutches) because of the stress put on their bodies. Females can lay between 10 and 40 eggs per clutch, depending on the food and nutrient consumption during the period of development. Eggs can take between 5 and 14 months to hatch. Sexual maturity is achieved at approximately 6-7 months of age for captive-bred panthers, but it can be achieved as early as 5 months of age. Wild Panther Chameleons usually reach sexual maturity at a minimum age of 7 months.

Usually, it is relatively easy to feel the eggs in a gravid (egg-bearing) female's stomach. The female, when gravid, will become noticeably more rotund in the latter stages of egg-development, and sometimes, the outline of the eggs can even be seen on her stomach. If a suitable egg-laying site is not provided for pet chameleons by the owner, the female will retain her eggs and become "egg-bound", where she will then be unable to pass her eggs. This is a very serious condition, and if it is not caught in time by a veterinarian and operated on, it usually results in death.

Like most species of chameleons, the Panther Chameleon is very territorial. They spend the majority of their life in isolation, apart from mating sessions. When two males come into contact, they will change color and inflate their bodies, attempting to assert their dominance. Often these battles end at this stage, with the loser retreating, turning drab and dark colors. Occasionally, the displays result in physical combat if neither contender backs down.