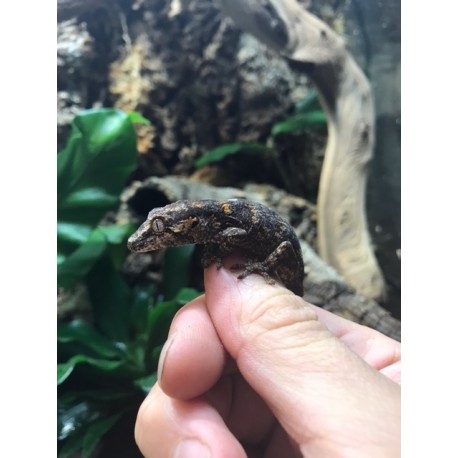 The Gargoyle Gecko or New Caledonian Bumpy Gecko, Rhacodactylus auriculatus, is a species of gecko found only on the southern end of the island of New Caledonia. Its habitat is threatened by deforestation on the island. This gecko, along with several other Rhacodactylus species are being considered for protective measures by CITES, which would put restrictions on their exportation. This gecko was first described by Bavay in 1869.

This reptile gets its name from the cranial bumps that give the appearance of horns or ears. Other characteristics of this gecko include a thin prehensile tail, which will regenerate if it drops off and thin toe pads. Starting as small as 3 grams and an inch in length (from snout to vent) at hatch and reaching an average size of 5-6 inches (snout to vent length) and 60 to 70 grams in weight. They are considered a medium to large size gecko.

They occur in many colors, including varying shades of greys, browns, white, yellow, orange and red with varying patterns of blotches and striping. They are commonly captive bred for particular traits of pattern and color.

Gargoyle Geckos are nocturnal and arboreal, making their home in scrub forests. The female lays two eggs per clutch which hatch 60-90 days after they are laid.

Gargoyle Geckos make interesting terrarium inhabitants. In captivity, these geckos readily accept live foods such as crickets feeder roaches and waxworms. They also will accept fruit mashes, fruit and powdered gecko diet (mixed with water). They should not be fed any kind of baby food, although it was once popular to do so. Special gecko foods can be purchased from companies such as Repashy and T-Rex. The specialized diets are suggested for keepers, they have the correct nutritional balance of vitamins and minerals already added and not found in basic fruit purees.

Rhacodactylus species are relatively new to being kept in homes and there is much still to be learned. Gargoyle gecko males should always be housed separately or as a part of a breeding pair or trio with females. Males housed together will always fight. It has been said that females are social and can be housed together but this tends to be based on the individual. Juveniles are known to be very aggressive towards cages mates as well. Cannibalism of cage mates tails, toes and other extremities is not uncommon. Except during the breeding season, they should be housed separately, no matter the gender, age, or size.