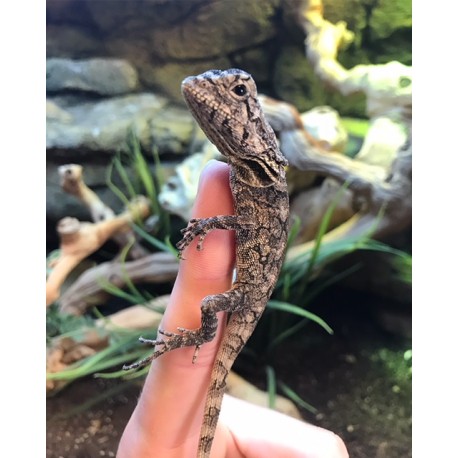 Frilled Lizards (Chlamydosaurus kingii), also known as the Frill-necked Lizards or Frilled Dragons, are found mainly in northern Australia and southern New Guinea. Its name comes from the large frill around its neck, which usually stays folded against the lizard's body but will flare up in defense.

The frill-necked lizard is so called because of the large ruff of skin which usually lies folded back against its head and neck. The neck frill is supported by long spines of cartilage which are connected to the jaw bones. When the lizard is frightened, it gapes its mouth, exposing a bright pink or yellow lining; the frill flares out as well, displaying bright orange and red scales. This reaction is often used to discourage predators or during courtship. The lizard is a member of the agamid family. It a relatively large lizard, growing up to 36 inches (91.4 cm). The lizard is also capable of bipedal locomotion.

The frill-necked lizard does not have a standard colour; however, it is characterised by a body that is darker than its frill. There is only one recorded species of the frill-necked lizard; however, the immense variations of colour among the species has led some scientists to hypothesise more than one species.

The frill-necked lizard is found mainly in the northern regions of Australia and southern New Guinea. The lizard inhabits humid climates such as those in the tropical savannah woodlands. The frill-necked lizard is an arboreal lizard, meaning it spends a majority of its time in the trees. The lizard ventures to the floor only in search of food, or to engage in territorial conflicts. The arboreal habitat may be a product of the lizard's diet, which consists mainly of small arthropods and vertebrates (usually smaller lizards). However, the trees are most importantly used for camouflage. There is not one standard colour: rather, colouration varies according to the lizard's environment. For example, a lizard found in a dryer, clay filled environment will most likely have a collage of oranges, reds, and browns; whereas a lizard found in a damper, more tropical region will tend to show darker browns and greys. This suggests that the lizards use their habitats for protection in the form of camouflage.

Like many lizards, frill-necked lizards are insectivorous, feeding on cicadas, beetles, and termites. They especially favour butterflies and moths, their larvae even more so. Though insects are their primary source of food, they also consume spiders, other lizards, and small mammals. Like most members of the agamids (dragons), frill-necked lizards employ an ambush method of hunting, lying in wait for their prey. When the lizards eat, they eat in abundance; these binge periods usually occur during the wet season, when the lizards will ingest hundreds to thousands of alates (ants or termites).

The frill-necked lizard is ectothermic and maintains its homeostatic body temperature by basking for up to 40 minutes. This achieves an average of 2-3 degrees Celsius above the surrounding temperature. Weather conditions, including sunlight, are the main factors regulating the lizards' temperature. This basking period usually occurs in the morning to early afternoon. During the basking period the lizard will be found near the bottom of a tree and out from under the forest canopy. This insures maximum exposure to sunlight. However, the lizard's final internal temperature depends mainly on the ambiance of the surrounding environment. It is thought that the lizard's frill aids in thermoregulation.

The frill-necked lizard is sexually dimorphic; meaning the male and female frill-neck differ in their physical appearance. This dimorphism is apparent in the length of the lizard; the male is generally larger than the female. There is little to no dimorphism in the color of the lizard. Frill-necked lizards breed in the early wet season from September to October. Adult males fight for mates, displaying their frills and biting each other. One to two clutches of 8-23 eggs are laid from early to mid-wet season from November to February. The eggs are laid in a nest 2-8 inches (5-20cm) below ground, and usually in sunny areas. Incubation takes two to three months. Gender is partly temperature determined, with extreme temperatures producing exclusively females, and intermediate temperatures (84 to 95° / 29 to 35°C) producing equal numbers of males and females. Their eggs are soft-shelled.

The frill-necked lizard's small size makes it a target for a variety of predators. The lizards main threats are eagles, owls, larger lizards, snakes, dingos, and quolls.

The emblem of the Australian Army's Regional Force Surveillance Unit, Norforce (North West Mobile Force) is the frill-necked lizard. The lizard was selected as the unit's emblem because of its speed, aggression, and ability to blend in with its surroundings.

In the film Jurassic Park, the dinosaur Dilophosaurus was portrayed with a fictional neck frill, which was raised during attack, similar to that of a frill-necked lizard. The movie generated an increase in demand for the frill-necked lizard as a pet.[