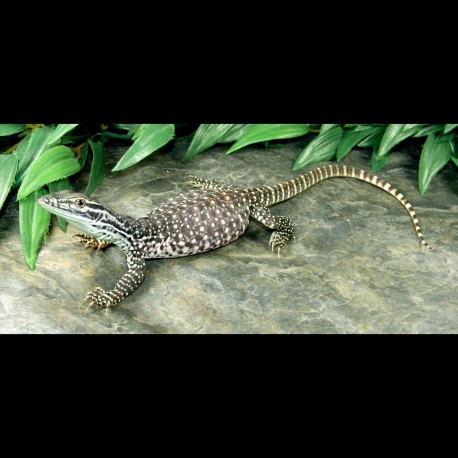 The Argus Monitor (Varanus panoptes) is a monitor lizards found in northern regions of Australia and southern New Guinea. It is also commonly known as the Yellow-spotted Monitor.

The size of an Argus Monitor differs greatly between the sexes, with the female reaching an average total length of three feet (90 cm), while the male reaches an average of 4-5 feet (120-140 cm), the larger sized animals being V. panoptes panoptes vs. V. panoptes horni. It is a reasonably lean monitor and does not put on the bulk that its African cousins often do. Most Argus Monitors are yellow in color, with a background of brown or dark tan. Their color often varies with place of origin or even the individual.

The Argus Monitor is a versatile predator and inhabits a large variety of biomes and habitats. They are primarily terrestrial, meaning they spend a great deal of time on the ground. This species is an avid digger and will dig large burrows or take over an already existing one, where they spend a sizable portion of their time. Despite all this, they will eagerly forage in trees and in the water. These large lizards are quite fast and will run up to 100 yards/meters to the nearest tree or burrow when they are chased. The Argus Monitor is riparian in habits and as such, it can usually be found around a permanent source of water. The Argus will often "tripod" in captivity (animal) and in the wild, raising up on their hind legs and supporting themselves with the tail. This unusual behavior is used to spot potential prey or enemies from a distance or when they are threatened. They exhibit this behavior on a regular basis in captivity. This habit provides them a unique characteristic that separates them from most other monitors.

In Arnhem Land, they lay 6 to 13 eggs between January and February.

Its prey consists of almost anything that it can overpower. This includes fish, crabs, small birds, rodents, insects and even other monitors. The Argus Monitor frequently preys on the dwarf monitors that it shares its range with. Spiny-tailed goannas and rock monitors are eaten on a regular basis. Argus Monitors have great senses, with smell being the most acute. Like all monitors, the Argus has a forked tongue and a vomeronasal organ in the roof of its mouth. It uses this organ in the same manner as snakes do and can often be seen flicking their tongues in search of a meal.

With such a voracious appetite, the Argus Monitor makes for an interesting animal and is great for breeding programs. Argus Monitors will often attack one's hand if they have not been fed recently. They are often thought to be "bottomless pits" because they can fit amazing amounts of food in their stomachs.

Recent studies suggest that the Cane Toad infestation has severely damaged the population of Argus Monitors within the Top End. It is estimated that numbers have dropped by as much as 90% in many areas.